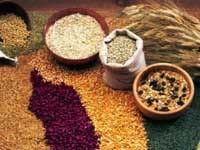 What are fiber foods? Your fruits and vegetables, of course, but also whole grains and legumes. I like to soak beans through the day and slow cook them over night. If the salt is left out until later, the beans will soften better. To avoid gas, or at least minimize it, I've found that it helps after soaking to bring the beans to a boil for a few minutes in fresh water and then using fresh water again to slow cook them.  Go ﻿here for some additional instructions on cooking beans, and a few basic recipes.

It's well worth the higher price to get whole grain bread. Better yet, make your own. That's where a bread machine comes in handy! I stick my ingredients in, press the dough cycle and an hour later there's the dough ready for buns or to pop into a bread plan. White flour and refined products just don't have the fiber we need. I saw a lecturer once take a loaf of white bread and wad it up into a ball the size of a baseball. Most of the bread was fluff.

My friend Jean had diverticulitis that nearly cost her life when it burst into her abdominal cavity. I have read that usually the cause of diverticulitis comes from constipation, though it can be related to being stressed out as well. I've had pain in my abdomen go away once I realized that it was caused by worry and by God's power I chose a positive mindset. Constipation can be a real problem, as you probably know. Some natural remedies for this difficulty lie partly in prevention, which is to drink at least eight or more glasses of eater a day and to eat plenty of fiber foods.

How to Cook Beans