Carob chunks?  For anyone from the 70s when carob was the "healthy rage" of their experimenting mothers, this sounds like the "healthy chocolate" hype and about as appealing as grits (sorry to anyone who loooooves grits). 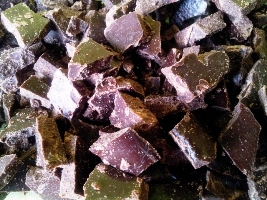 But the fact is, this yummy confection turns out to be delicious, score higher on the nutrient index than chocolate chunks (with iron, calcium, B vitamins and some antioxidants) and NO stimulants to cause the jitters or insomnia (cocoa, cacao, and chocolate contain theobromine and caffeine).

Carob is also naturally sweet (was once used as a sweetener), so the recipe only contains a small quantity of added sweetener (and nothing fake or unhealthy). AND, carob is GLUTEN-FREE which is a bonus for anyone out there who is gluten-sensitive or has Coeliac disease.

I am quite taken with these fudgy little morsels (I won't say "addicted").  They satisfy my desire for something sweet as a snack without shooting my glycemic blood levels to the moon.

Carob is often labeled "healthy chocolate".  That label tends to set people up to expect the same sort of taste and chemical reactions that they are familiar with where chocolate is concerned.  While carob chunks ARE chocolately brown and the texture is creamy, there is quite a difference in actual flavour.  I have grown to love the unique caramel-esque notes of carob.  I do not miss the rather aggressive high notes in chocolate, the sometimes-headaches and the occasional chocolate hangover.  I particularly do NOT miss lying in bed, wired, unable to sleep because I took in my caffeine in a bar.

I believe you will enjoy this little treat-- these sweet but not noxious Carob Chunks--and if you are a Mommy, your kids will as well.